The idea for a St Patrick's Day Parade in Athboy was first suggested at a monthly Community Council meeting in St James' Hall in early 1984. It seemed a huge and daunting task to the few volunteers involved but it soon became obvious that this was just the start of something new and exciting in the town. Now the event is enthusiastically supported and enjoyed by all and proudly celebrates community involvement. Each year a Community Personality of the year award is presented - in recognition of hard work and time donated to the community - at the St. Patrick's Night Presentation.

The first committee members of the first ever St Patrick's Day Parade were: 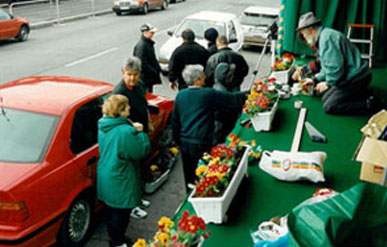 With less than two months to get the parade up and running, with absolutely no experience and no funds whatsoever - but with hard work, enthusiasm and the belief that this could be done Athboy's first ever St Patrick's Day Parade was a wonderful success!

Many things have changed over the past 30 years and the parade is no different. From that first night in early 1984, the newly formed committee could not have known just how successful the parade would become. Each year brings new difficulties and as committee members come and go the basic formula always stays the same - except now, 30 years later, we have a wealth of knowledge and experience to rely upon.

In 1984 the local Community Council had to fund the first ever Parade. In subsequent years and learning through trial and error the Committee have now become experienced fundraisers. Finance is always one of the major factors. The Committee relies heavily on the substantial donations received from the local business community and indeed from business throughout the County.​